One of the best parts of being out of school is that I no longer feel guilty when I go out on a weeknight. (It helps that we have a flexible start time at work, as well.)

Last Wednesday night, Sonata Arctica, Delain, and Xandria were in town as part of the Pariah's Child Tour. They performed at the VENUE, which is a relatively small venue. Having gone to a number of metal concerts in Vancouver in the past, the fact that it's a smaller venue does not surprise me, and in fact it makes for a more intimate show. VENUE is a nightclub in the heart of Vancouver's city centre on Granville street. The club features 3 bars (none of which were particularly busy during this concert), and interestingly there are 4 booths in the middle-back of the floor meant for people to sit, drink, talk, and enjoy whatever live act is playing. In the case of this concert, these booths were already occupied when we entered even though we were probably within the first 10 people in line to go in. We reckoned that in order to get a booth, you had to be part of the VIP group that went in earlier.

The doors opened for us at 7:00pm and we merely had to give a woman behind the counter our order number for confirmation and then we were inside. The merch tables were in somewhat awkward spots. Sonata Arctica's was between 2 of the bars and right by a hallway that led out into the foyer, and the Delain/Xandria merch table was out in said foyer. Regardless, that was where we headed first. All shirts were $25, and hoodies were around $45. The Sonata Arctica table did not have any CDs for sale, to my chagrin. There was a lot of selection for the shirts for Sonata Arctica, which was admittedly somewhat overwhelming. I was pleased that the vendors accepted $50 bills.

The show started at 8:00pm with Xandria, a German symphonic metal band with a somewhat gothic aesthetic. I used to be a fan of theirs when I first started university, but as they've gone through a couple different singers over the years, the band had fallen off my radar. Their set was relatively short, and featured songs exclusively from their 2 most recent albums: Neverworld's End and Sacrificium. This was disappointing for me at first as I am more familiar with their albums Kill the Sun and Salome - The Seventh Veil, but their newest singer, Dianne van Giersbergen, is fantastic. She sounds great live and she's got a cute stage persona. Her outfit was also beautiful -- a short dress with shiny bronze or orange in a feather-like pattern, meant to imitate the phoenix on the cover of Sacrificium. The highlights of this set were the opener ("Nightfall") and closer ("Valentine"), which were both catchy and mid- to high-energy.

Xandria's set lasted only 30 minutes or so, and Delain went on at 8:50pm. Delain is a Dutch band that started out in a genre somewhere between symphonic and gothic metal, but as of late have adopted a more accessible pop-rock sound. I have been a Delain fan since high school and having followed them from their Lucidity days up until now, I was extremely excited to see them perform live. It was their first time in Vancouver, and they mentioned that they will be back in April for the Nightwish concert. I was pleased to see that they had brought their own backdrop to place behind Charlotte, but in front of Sonata Arctica's large one covering the entire back curtain. Delain was generous with their set which included songs from all of their albums (EPs not included). The mixing at this point in the concert was disfavouring vocals so it was hard to make out the lyrics, and I felt bad for anyone not already familiar with the songs. It was such a treat to hear "Sleepwalkers Dream" and "The Gathering" live, and I got some nostalgia out of them as well. I realized that when they tour with Nightwish in April, there is a chance that Marco Hietala will join Delain on stage to perform the duets he's recorded with them. Needless to say, I am extremely excited for that Nightwish concert on April 25th. Delain seemed to be having a great time and I think that they were surprised by how well-received they were. Delain's set ended at 9:30pm, and it wasn't until 10:00pm that Sonata Arctica took to the stage. 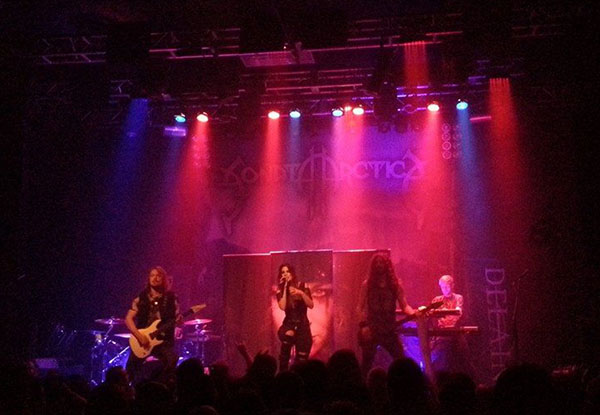 Sonata Arctica is a power metal band from Finland, though their style as of late has become more progressive, and their albums lack the speed of their previous works. Sonata Arctica has performed in Vancouver a number of times in the past, but it has been a couple of years since they were last here as I do not think that they had come here promoting Stones Grow Her Name. Tony mentioned early on in their set that they were celebrating 15 years of Sonata Arctica so they would be playing songs from their old albums. This was a great move on their part, and they, like Delain, had a good spread of songs from albums old and new. By playing their older songs, they ensured that there would be some fast songs, and the crowd much appreciated it by starting a mosh pit. Again, the mixing was favouring the drums and guitars over everything else, so Tony was sadly drowned out at times. Some highlights of their set included "My Land", "Black Sheep", "Letter to Dana", "X Marks the Spot", "FullMoon" (an especially fun song that gives the audience a chance to chime in during the chorus), and their encore. And boy oh boy, what an encore! They kicked it off with my favourite track off their new album, "Blood", which sounded great despite the horrible mixing. Having done research into setlists before coming into the concert, I had noticed that "Victoria's Secret" had been kept off the setlist for a number of recent stops. As this is one of my favourite Sonata Arctica songs, I had -- in an act of desperation -- tweeted them asking them to pretty please play it when they stopped in Vancouver. Now, I don't know if my tweet had any real influence on their setlist, but lo and behold, "Victoria's Secret" was the 2nd song of their encore. They ended the show with "Don't Say A Word", another one of my favourites, and it proved to be an excellent choice for their last song. 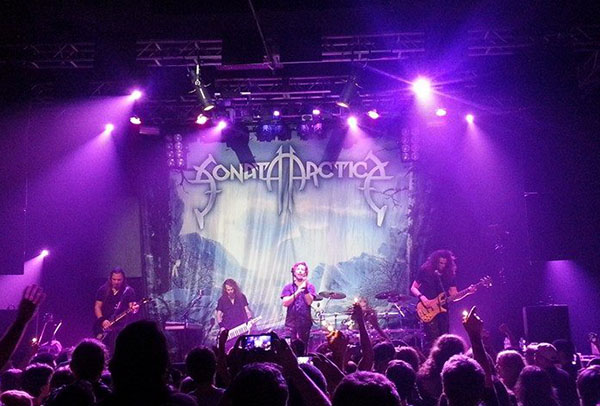 All in all, the bands (at least what I heard of them) were fantastic and with the exception of Xandria, the setlists featured a variety not usually found in concert setlists. It was unfortunate that the mixing did not boost the vocals enough, however. Aside from that, the venue was adequate and though I stood near the back, I could see that the crowd could go all the way up to the stage and there was some interaction between the bands and the audience in the first row. It is also rare that a concert should feature 3 bands that I am familiar with, never mind actually already being fans of all 3. Should these bands return in the future, I would definitely see Sonata Arctica and Delain again. Perhaps if I get into Xandria's future albums, I would make the effort to see them as well. And though VENUE was not the best for sound quality, it was good enough, and I would attend another concert there in the future.

(All photo credits go to my friend and best concert buddy Krista Wong.)